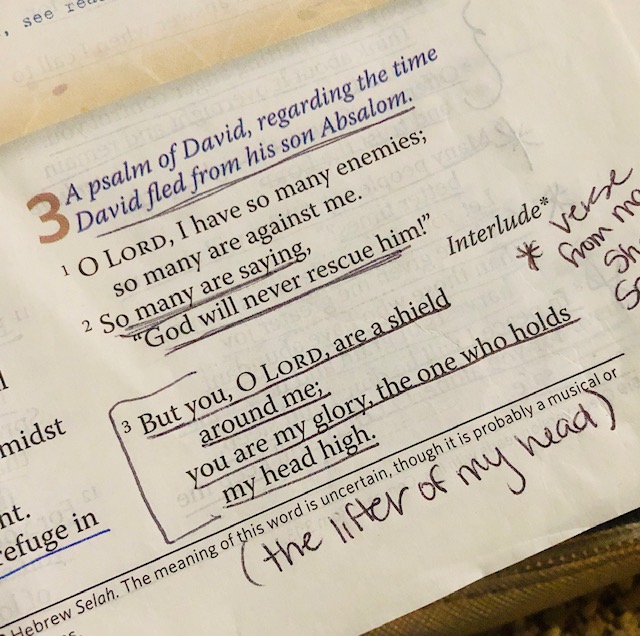 Ok, y’all. So something has been on my heart. We are mostly isolated right now. Social distancing…sheltering in place…quarantining…whatever buzz words you choose. And in doing that, we are separated from those who would normally be our voices of reason. Our sounding boards. Our reminders of Truth when a conversation turns south and fear or anxiety starts to win.

And in their places, we find the voices of the media, politicians, and a plethera of “experts” who leave us finding it hard to know who to trust. The news stream offers a consistent dialogue of uncertainty and doom on every front, with very little to lift our spirits. And I can’t help but feel that many are left wondering who will rescue them from this uncertain time.

I am reading a Psalm a day right now, and as I studied Psalm 3, I found that not much has changed when it comes to people searching for deliverance…and doubting the One who is the ultimate Deliverer:

Psalm 3 was written by David when his son, Absalom, was pursuing him, and he was literally running for his life. In verse 2, the people around him…the “so many”… proclaimed that God would never rescue him. And I imagine, his heart and mind were close to despair as fear, anxiety, and heartbreak threatened to overtake him.

But David knew the Lord. And he not only knew Him, but He believed that God would do what He said He would. And so immediately in verse 3, David replied, “But you, O Lord, are a shield around me; you are my glory, the one who holds my head high.”

I’m sure that many of you have heard the Lord called our shield before, and in the past, I have always loved that image because I imagined him as a strong wall, protecting me and covering me in times of trial…almost like a shelter. But this time, I realized something I hadn’t before.

In verses 7-8 of Psalm 3, David exclaims, “Rescue me, my God! Slap all my enemies in the face! Shatter the teeth of the wicked! Victory comes from you, O Lord…” Wow! A little harsh there, right? That didn’t match the image I had in my mind of the Lord as a shield, until I studied a little more and found that a shield was used for offensive AND defensive purposes. It could be used to knock an opponent back when needed…just as the Lord can be fierce as well. He is more than capable of handling the most fearsome adversaries, whether a person or a virus or an economic crash.

Y’all, the Lord has us covered on all sides as he fights AND defends.

Not only that, but these are what the Lord does for us WHILE we are hidden behind His shield: He lifts our heads (v.3), He answers our cries (v.4), He watches over us and allows us to rest (v.5), He eliminates fear (v.6), and He fights for us and rescues us (v.7).

Y’all, I don’t know what the next few weeks, or months, hold for our nation, but I do know that as we “shelter in place”…our focus should not be so much on the action of sheltering…as on the type of Shelter we choose.

I don’t believe David doubted that God would rescue Him. That He would be his strength and shield. But the people around Him did. And the voices of fear and uncertainty and doom and gloom can be so very loud.

Decide today who you are going to listen to, my sweet friends. Be informed. Seek wise counsel here on Earth from those you trust. But don’t allow the background noise of your heart and mind to be those who promote anxious thoughts. Don’t listen to those who doubt the power and the might and the goodness of God.

David chose to trust his Lord. He chose the ultimate Shelter and Shield. And he ultimately, chose faith over fear. And we can too.

View all posts by thelittlemomentsorg